Re-imagining social licence for the business of tomorrow 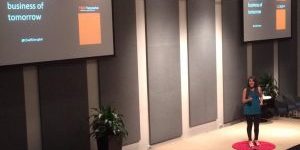 In a world of rapid change where we are seeing unprecedented technological advancement we need to start thinking about its impact on people. The digital revolution and all its benefits may cast  a shadow over  humanity if we don’t start factoring in the needs of people .

I was recently invited to speak at TedX Haymarket on “Fostering the Business of Tomorrow”, and humbled  by the opportunity. I sought the help of my friends to explore how we can shape the future of business to be more human centred – the result was a serious proposition to reimagine social licence.

The flipside of progress

The flipside of technological advancement is changes to jobs as we now know them. According to the International Labour Organisation, global unemployment (201 million unemployed, 1.4 billion vulnerable employment and 2 billion not in the labour force), is expected to reach 6.3 billion: that’s billions of families and countless communities affected in developed and developing countries.

In a recent blog, digital transformation guru Paul Shetler said “the new economics of IT have already transformed business processes – and there’s plenty more to come. The low cost of IT is encouraging even more experimentation and automation. We used to think of technology displacing low-skilled jobs, butmachine learning and mechanised processes are playing a greater role in white-collar professions like law and accounting.”

Progress just isn’t progress if we leave people behind.

Accenture faced this challenge when it replaced 17,0000 jobs through automation, which it gracefully managed by investing in  reskill its people and redeploying them throughout the business. Accenture’s social licence is to invest in its people to mitigate job losses, which positions it as a leader in human centred innovation.

The WEF Global Risks report warns that “underlying the rise of disaffection with the political and economic status quo is that social protection systems are at breaking point… and technological change means stable, long-term jobs are giving way to self-employment in the “gig economy”.

Before you get all bothered by the idea of a million stakeholders imposing demands on every business,  consider this: many businesses are operating with social licence today because community support is integral to their survival.

In Australia in April 2017 a landmark agreement was struck between Unions NSW and Airtasker – the agreement recognised that there was a need to establish standards of minimum wages and conditions to protect the interests of gig economy suppliers.

The business of tomorrow is inclusive and collaborative and understands place – that it is part of interconnected ecosystems made up of stakeholders and community.

Uber in Australia established a social licence through a commitment to job creation and rigorous community engagement that I saw first hand though a friendship with Bel Johnson (Community Engagement ANZ and now Global). I saw firsthand how Uber was empowering drivers from diverse backgrounds, who tend to disproportionately come from postcodes with higher rates of unemployment and 20% of whom were unemployed when they joined Uber. Uber also employs a number of deaf and hearing impaired drivers able to drive because of the accessibility features within the app, with most drivers using Uber as a second job. The fact that Uber is creating employment through its initiatives in areas of high unemployment is a story that isn’t told enough.

According to the Department of Human Services there are 1.4 million people dependant on the disability support pension and unemployment benefits in Australia. To me, this represents wasted human talent and despite enormous investment by governments around the country we have failed to improve the participation rate for people with disabilities in particular.

The business of tomorrow is human-centred

Gavin Heaton and I have been working on a solution to this problem – Works4Me –  a pre-employment marketplace that connects long term unemployed to more flexible training, internship and employment opportunities. We are doing this because we believe that it’s up to us to contribute solutions that connect disadvantaged people to opportunities. The solution uses technology to provide greater opportunities for people who are unable to work, train or study on regular fulltime or part time basis due to health, caring or physical limitations.

In November 2015 Annie Parker, Nicole Williamson and I founded TechFugees Australia – we did so to enable the tech community to connect with refugees and help improve settlement outcomes. A co-design hackathon it places refugees at the centre and creates the space for collaboration. One of our first alumni – Anna Robson and Nirary Dacho founded RefugeeTalent and now MigrantTalent.  The platforms were born out of Nirary’s experience as a skilled refugee with so much to give but no opportunity to utilise his carefully curated skills in IT and Anna’s experience working in refugee camps. Anna and Nirary are now solving a major problem in refugee and migrant employment. Anna and Nirary are forging ahead with their business expanding rapidly and moving to look at employee sponsorship of skilled refugees offshore and partnering with major players. Anna and Nirary continue to support every TechFugees Australia event and present a glowing example of the power of tech to solve complex social problems.

So we can see that new business and startups are naturally operating with social licence but what about established organisations?

In this space I am heartened by the work of Futurist Jeremy Scrivens who works with leaders around the world across corporate and government to help them reconnect with their staff, their customers and communities.

Scrivens is working with the UK National Health Service leadership and creating NHS as social movement because managing health is everyone’s responsibility and by collaborating more widely the NHS achieves its goals of improving health outcomes. He’s even worked with Australian mushroom farmers to transform their business by re-engaging their workforce including refugees to open up new market opportunities and leaving a legacy behind.

Increasingly we are seeing business and government understanding that no single entity or sector can solve complex problems and are looking at ways to engage with their staff and customers and collaborate with their stakeholders.

The very nature of digital is causing greater transparency and accountability – in the long run.

In the new world customers and citizens are demanding greater attention to the human impact of progress. This is why I believe that social licence will be an imperative of the business of tomorrow, after all progress just isn’t progress if we leave people behind…so let’s take them with us.

Anne-Marie is a speaker on innovation, collaboration and disruption. She is an honorary Associate of the Institute for Public Policy and Governance, UTS.

Anne-Marie is on the Board of Spark Festival, Vibewire; Western Sydney Women; the Australian Open Knowledge Foundation; Autism Advisory Board, and the Settlement Services International Foundation.